This E-frame wasn't primarily designed for combat and was therefore less maneuverable and sturdy than others. However, for an expert technician and pilot like Lt. Maggie Weston this frame was an optimal choice, allowing her to fix her allies' damaged E-frames in combat. Weston's Algernon Upgrade was a Chain Lightning Cannon firing a beam of electrical energy that ricocheted from target to target and even bent around obstacles. The PO-024's Neo Sapien manufactured analogue was the Construction E-frame.

This description is based on the Playmates toy information and may not match the one appearing in the TV series.

Chain Lightning Blast (A beam weapon that can intentionally ricochet or jump from target to target, as well as bend around obstacles)

The PO-024 is probably the tallest E-frame out of the various Exofleet designs. As the name implies, its primary function is to repair and salvage an exosquad’s e-frames rather than slug it out in open combat. Field Repair e-frames are also employed for performing repairs on capital starships. They are also a common sight working alongside non-e-frame construction vehicles in removing debris and erecting makeshift buildings in the aftermath of military operations on the ground. Their size makes them difficult to conceal; this may be the reason why they were rarely used by Earth and Venus Resistance members who were constantly hiding their salvaged e-frames from constant Neo patrols.

As such, the PO-024 possesses a welding torch on its right arm and a rotating vise claw on its left arm. A second welding torch (or plasma cutter) is folded behind the pilot's cabin; this device extends outside and onto the roof of the e-frame when in use. Cable winches are mounted underneath and in the back of the e-frame, and work lights are mounted on the shoulders and on either side of the pilot’s cabin for overhead illumination. More work lights are located on the underside surfaces between the e-frame’s legs. As the PO-024 may also be tasked with recovering the remains of destroyed or damaged spacecraft, it can access and play flight recorders (black boxes) for on the spot investigations with a cable reader (Heart of Mars).

On board armament is minimalistic; two close range blasters on the sides of the pilot’s cabin and a single missile on top of the right side welding torch. Professor Algernon altered the welding torch into a chain lightning projector which could strike multiple targets grouped too close together. While not intended for combat, field repair e-frames in Exofleet service are far more likely to be seen in battle than their Neo Sapien construction/engineer equivalents.

While the PO-024 usually walks on its legs, short length tracks allow it to make fine adjustments in movement when operating close to delicate machinery.

Three colour schemes have been observed for the PO-024: yellow, red and gray.

The PO-024 is likely a homage to the Power Loader from 'Aliens'. 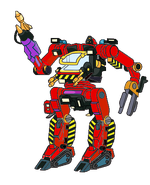 The PO-024 Field Repair E-frame in Ready Player One.

Community content is available under CC-BY-SA unless otherwise noted.