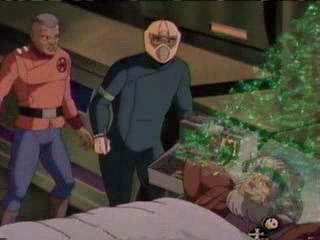 A condition that affects those that have prolonged exposure to Dark matter. The light bending properties of Dark matter accelerate the nerves of the brain and nervous system giving rise to violent tempers and mood swings. The Hyper accelerated nervous system has great difficulty in repairing itself, and if damaged in anyway, it will generally lead to a degenerative condition.

Professor Algernon developed a treatment for Dark Matter syndrome when Simbacca was attacked by Hallas. Using a full spectrum treatment, Simbacca’s neural path ways and nerve cells were slowed down to normal speeds and were more capable of repairing themselves. This treatment saved Simbacca’s life following Hallas’ assassination attempt.

Community content is available under CC-BY-SA unless otherwise noted.
Advertisement