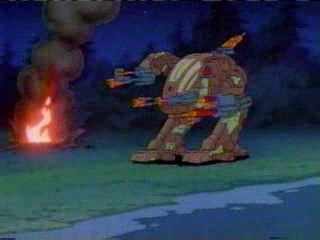 The following describes the Playmates toy and may not match the TV series version.

Draconis was the most well known pilot of the AL-002. He drove it during most of the the Neo Sapiens’ war on humans, including the first attack on the Homeworlds. Only during the overthrow of the Neo occupation forces on Venus and in the Amazon did Draconis (and his replacement clone) fly the smaller (and much uglier) MM-120 Interrogator e-frame.

Draconis’s second replacement clone was driving an AL-002 during the Terran’s final assault on Phaeton’s bunker, when Rita Torres smashed through his cockpit with her e-frame’s grip claw and killed him.

Various resistance cells appropriated these e-frames during the Neo Sapien occupation of the Homeworlds. One of these resistance pilots was Picasso.

Troop Transport E-frames were either painted in dark earth or Neo Sapien issue light purple. Just like the AA-569 Amphibious Assault e-frame, they also had paint streaks applied as a camouflage attempt.

Troop Transport E-frames were heavily armed bipedal walkers with forward facing blaster cannons mounted on the undersides of the pilot’s cabin and on outriggers. Rear mounted cannons (or grenade launchers, if one refers to the Playmate’s literature) were also a fixture.

Although named as a ‘Troop Transport’ e-frame, this vehicle was not seen carrying or unloading Neo-infantry (also dubbed Neo-troopers) in the series. However, this e-frame’s large, boxy rear could have served as an infantry compartment.

The Exofleet analogue for the Troop Transport would have been the RA-678 Rapid Assault E-frame. The advantages of the RA-678 over the AL-002 was that it could fold its legs all the way towards the rear for flight, presenting a smaller frontal target and becoming more aerodynamic. While the AL-002 relied only on walking on the ground, the RA-678 could either walk on its legs or travel on road wheels built within its feet.

Draconis preparing to battle (Behind the Shield)

AL-002 in standard purple scheme (Behind the Shield)

Picasso of Earth Resistance with his AL-002 (Art of War).

Community content is available under CC-BY-SA unless otherwise noted.